As Tiverton Zoning Board of Review Alternate Member Joel Bishop discussed on Tiverton on Track 23, Chairwoman Lise Gescheidt ambushed him at the end of their November 4, 2020, meeting with a complaint that he had “missed more meetings than anyone else has missed” and that he has discussed his experiences of Zoning Board membership in public, leading her to ask the Town Council to kick him off.

Back in August, when Bishop was up for reappointment, then-Vice President of the Tiverton Town Council Denise deMedeiros had ambushed him, too, saying that “it has come to my attention” that he had missed several meetings.  This unprecedented attack forced Mr. Bishop — who, after all, was attempting to volunteer for a seat on a local board that would otherwise have remained empty — to divulge personal medical information on a public Zoom meeting.

Gescheit’s attacks on Bishop’s free speech are a matter of opinion, but her claims about his attendance, which deMedeiros found to be deserving of unusual attention, can be checked.  During the year leading up to the November 4 meeting, Bishop (a non-voting alternate member of the board) had missed two of the five Zoning Board meetings for which minutes are available to the public, one because he was on a scheduled family vacation and the other for health reasons.

The question is:  Is that a lot, compared with other members?  A review of Zoning Board meeting minutes going back to August 2017 shows that it is not.

In fact, when Zoning Board Full Member Wendy Taylor Humphrey missed the December 4, 2019, meeting just before Bishop’s first absence, it was her third missed meeting out of five, beginning the prior May, according to the minutes.  There is no record of her being censured or harassed over her attendance.

Turning back the calendar to the prior year shows two meetings, in June and August 2018, that the board had to cancel its meeting for lack of a quorum.  That means out of a board with five regular and two alternate members four members were absent for those two meetings.  Because she missed the July meeting, that year, if Humphrey was one of those who couldn’t make it, she effectively missed three meetings in a row.

If Gescheit was one of the reasons those two meetings couldn’t be held, then she effectively missed three meetings over the course of nine months.  So did Full Member George Alzaibak, over six months.

Did the Town Council — under then-President deMedeiros — grill the Zoning Board members over their absences?  Should they have?

No and no.  If memory serves, the attitude was appropriately that these are the challenges that arise when a town government relies on volunteers as volunteerism becomes less common.  No doubt, all of the members had good reasons for their absences (as did Bishop), and even if they did not, interrogating volunteers when they are hard to come by is a destructive approach to town government.

That’s a lesson Gescheidt, deMedeiros, and their circle of political allies should take to heart.  Keep in mind that deMedeiros was council president in 2018 because her circle had ousted Joan Chabot from leadership in late 2017 and she was council vice president for Bishop’s reappointment in 2020 because they had succeeded in a politically motivated recall election of the leadership team (including this writer) in late 2019.

For the crew currently controlling the government in our town, it’s all divisive politics all the time.  Things that aren’t worthy of mention when they do them become excuses for scandal when others do them.  Keep a close watch and you’ll see this happen over and over. 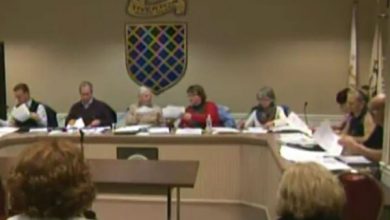