Given the effectiveness that the Tiverton Taxpayers Association has had simply by informing residents about comparative tax rates in Tiverton and neighboring towns, the task of those who want their neighbors to pay higher taxes has been to argue that taxpayers shouldn’t believe their own lying eyes, because our taxes aren’t all that high.

Leading the charge on this campaign has been Michael Silvia, with his latest effort being to promote Tiverton’s “generous” tax exemption and low rate on motor vehicles.  “There are plenty of opportunities to lower residential property taxes,” he writes, implying that raising the motor vehicle tax might be one of them.

For the sake of clarity, I’ll merely correct Silvia’s omission of the fact that Portsmouth and Richmond assess motor vehicles at a discount that would effectively move their rates below that of Tiverton.  A more important observation is that the motor vehicle tax is a relatively small tax.  If Tiverton were to match the median effective motor vehicle tax rate in the state (accounting for different exemption amounts), it would generate less than $900,000, which is less than 2.5% of the levy.  Moreover, doing so wouldn’t reduce the levy (the total tax) at all; the effect would be simply to transfer the tax burden away from wealthier home owners to less-wealthy car owners.

At best, in other words, it’s an on-paper reform, and at worse a regressive tax cut for the rich, something that progressives like Silvia are supposed to oppose.

But there’s more to Silvia’s contention.  Note this point:  “For the record, Tiverton’s tax rate falls near the MIDDLE for residential property and well into the BOTTOM HALF for commercial property.”

Yeah, about that “near the middle for residential property” tax rate… Silvia doesn’t bother to adjust for the value of houses or the size of the tax levy.  The TTA highlights the tax rate in comparison with neighboring towns because if somebody is looking to buy a house in this general area, the tax rate goes directly to the amount that he or she can afford to spend based on a mortgage payment.  Taxes just go right on top of the debt payment every month, so buying in a town with lower taxes increases the amount that the family can afford to pay for the actual house, making both the buyer and the seller wealthier.

However, for a comparison of how much Rhode Island municipalities can afford to tax their populations, we have to look at those populations.  The following chart shows every municipality’s FY17 tax levy divided up  on a per person basis.  You’ll notice that Tiverton is 12th highest in the state, out of 39. 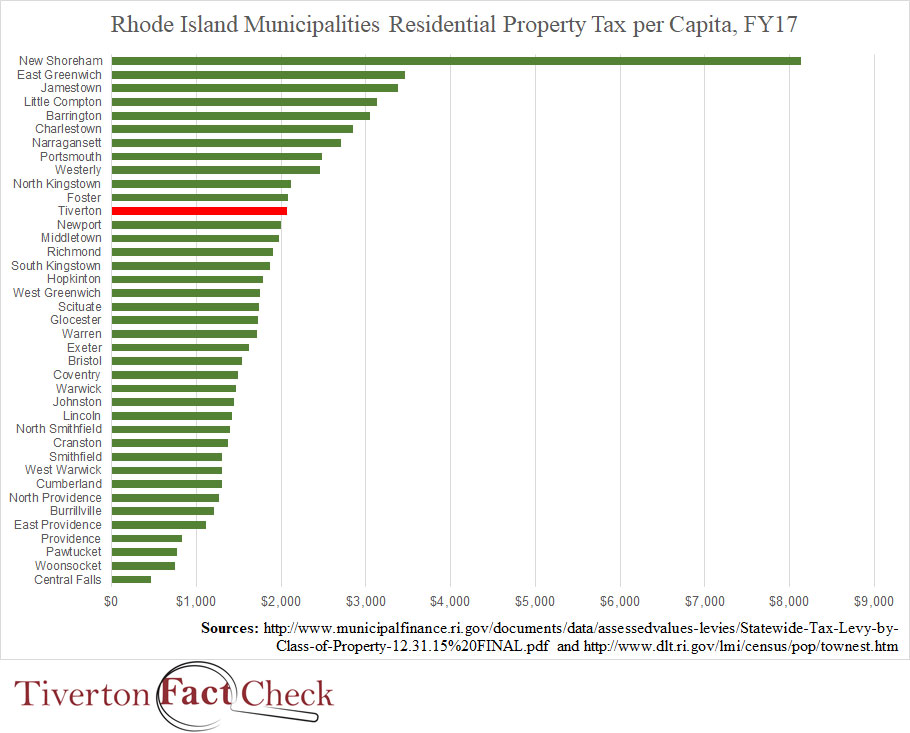 This is where somebody with Silvia’s point of view might say, “Aha!  See!  Portsmouth and Little Compton are higher than Tiverton.  So much for your tax rate map!”

Let’s not lose sight of the fact that Tiverton is high by either measure, but there’s one final point to make.  Portsmouth and Little Compton are able to charge more per person because their property is worth more and their residents are wealthier.  The median family in Portsmouth makes $100,359, to Tiverton’s $84,536.  Per person, the numbers are $43,035 and $37,351.  Little Compton is even higher.

What that means, though, is that lower-and-average-income families actually benefit more from the lower tax rates of those two towns.  They can buy properties that are worth more in Portsmouth and Little Compton and increase their wealth because the towns don’t take as much in taxes on that house.  However, they’re able to take more from the wealthier families around town.

At the end of the day, Tiverton has to stop being guided by the high-tax-crowd’s question about how much they can get away with taking from their neighbors in taxes and start being guided by what’s actually good for the people who live here. 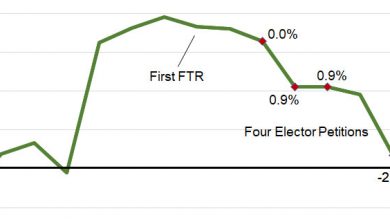