A while back, while discussing the annual decision of voters to pass budgets that increase Tiverton’s tax levy by less than 1%, somebody quipped that the town couldn’t keep operating on a 1988 budget.  Ah, 1988.  The country was deciding who would fill Ronald Reagan’s shoes as president.  Celine Dion was still singing in French.  And movie theaters were showing Rain Man, Beaches, and the first Die Hard.

But what about Tiverton’s tax levy?  My records don’t go back quite that far, but the audit for 1990 reports the tax levy that year as $10.8 million (after exemptions).  By comparison, the 2016 audit reports a levy of $37.8 million — more than triple!

Some might point out that this comparison doesn’t account for the cost of living (inflation), and yes, that adjustment would close the gap some.  Increased at the same rate as the Consumer Price Index (CPI), the 1990 levy would have been $20.0 million in 2016, still $17.9 million less than we actually paid.

It would be more true to say that in 2016 we paid 2044 taxes, because that’s when the average inflation rate of the last three decades would have brought the 1990 levy up to $37.8 million.  If remembering 1988 makes you feel old, how young does imagining 2044 make you feel?

As the following chart shows, increasing taxes well beyond inflation has been a persistent problem in Tiverton. 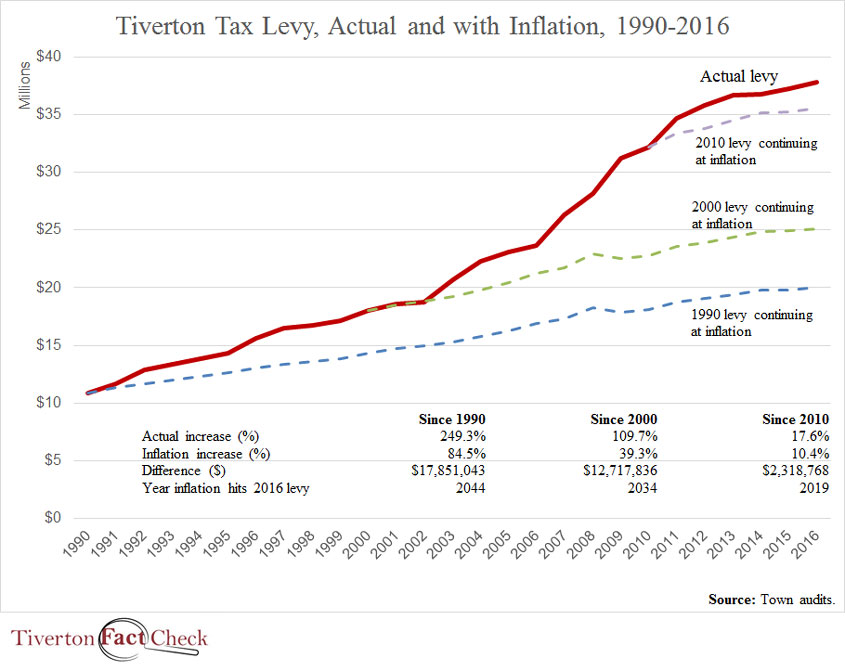 Those who insist that a few years of relatively low tax increases have already squeezed the excess out of Tiverton’s budgets have to explain all of this extra spending year after year after year over decades.  The most obvious justification would be debt on our still-new buildings and repairs, but the payments on all of our debt totaled 4.0 million in 2016 (not including pensions).  That’s a small fraction of the increase.

Tiverton residents who constantly demand more of their neighbors’ money in taxes should stop and think about how harmful and unfair that gap is for working families. 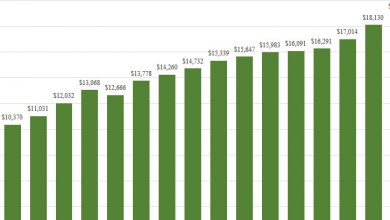