The result of the recall election says more about our opposition and the times we’re living in than about us or our supporters.

A small group of activists were willing to lie relentlessly in order to get enough people who opposed us to sign the recall petition and then vote, with the help of the old-school rumor mill and toxic social media. Toward the end of the campaign, no fewer than five dishonest mailers went to Tiverton homes, three of them from out-of-town special interests.

In keeping with the out-of-town influence, one outcome of the vote is that powerful state representative John Edwards, the Fourth, has his son back on track in town government. Last time he was on the council, the state Ethics Commission found that John Edwards, the Fifth, acted unethically when he advocated and voted to give taxpayer money to his own private organization. However, the prior town solicitor took the fall, saying he’d given Edwards bad advice.

With Edwards on the Stolen Town Council, Tiverton residents should keep a close eye on its activities. We should also watch for quid pro quos to others who were involved in the political hit job.

For our part, the two of us are grateful to our supporters for the continued encouragement. We took a risk in asking you not to vote in the sham recall, and things didn’t go as we would have liked. However, we continue to believe that, in the long run, our town will be better off having the recall be seen clearly as what it was: a one-sided attack on our democracy. Our experience over the past year has affirmed our belief that our town’s professional and talented employees can move Tiverton toward the future residents deserve if only we can free them of the micromanagement and political nonsense that have been far too common around here for decades.

It remains the fact that more Tiverton voters wanted us to represent them than wanted our opposition, and we will continue to advocate for you in and out of office. The TTA slate will still have three seats on the council, now, instead of four, and the two of us will be working closely with them. We will also continue bringing important issues into the open and working to develop solutions.

Our mission all along has been to help change the unsustainable direction of town government, and this experience has clarified our understanding of what needs to be addressed in order to accomplish that goal. We’re excited about what comes next. 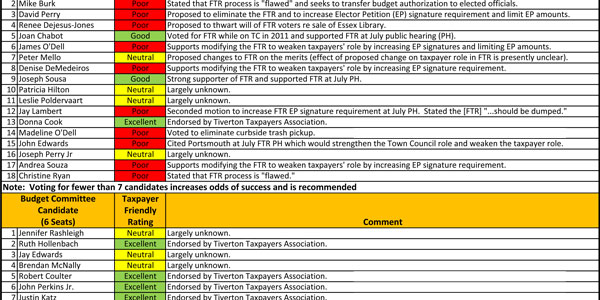