It’s been a remarkably quiet election season in Tiverton, especially given the importance of the election, the number of candidates, and the battles on Facebook.  Yard signs can be found, but the local newspapers have not had nearly the volume of letters they usually publish.  Debates that used to happen have not been held.  And even competing Web sites have not been popping up like they used to.

To help give voters someplace to meet candidates in person and ask them questions, the Tiverton Republican Town Committee (TRTC) decided to host a forum open to the public and to invite all of the candidates for Town Council.  (Tiverton’s elections are nonpartisan, anyway.)  To accommodate a large group, the TRTC booked the community room at the town library for Thursday, October 25, and the library confirmed the booking on October 2.

With less than a week to go, the new library director, Catherine Damiani, emailed Laura Rom, of the TRTC, to let her know that the booking had been canceled.  Apparently, Town Administrator Jan Reitsma and Town Solicitor Anthony DeSisto had contacted her and advised her that some fliers from the TRTC had a “partisan tone,” so the event might “conflict with the Tiverton Town Charter and the usage of town-owned property,” under Section 1218 of the Tiverton Home Rule Charter.

Section 1218 forbids any “officer or employee of the Town” from using “Town property, goods, money, grants, or labor to influence the outcome of an election, ballot question, or referendum.”  A few dubious claims have to be made to justify canceling the event:  that the flier made it partisan, that allowing it to go on would mean the library director “cause[d] [the room] to be used,” and that an open forum was intended to “influence the outcome” of the election.

Before any of that matters, though, we have to mention the fact that in 2016, under Mr. DeSisto’s guidance, the Town Council ruled that Section 1218 does not apply to the library!  That year, multiple signs and materials had appeared on library property, seemingly with permission, advocating for one of the budgets at the financial town referendum (FTR).  Members of TTA filed a charter complaint, and the council dismissed it, also stating that residents might have a First Amendment right to post political materials on library property.

Apparently, the rules have changed.  See this article on Ocean State Current for more details. 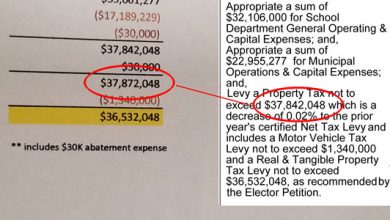 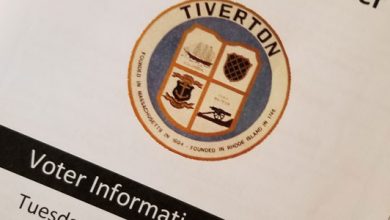 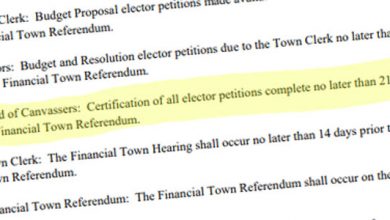 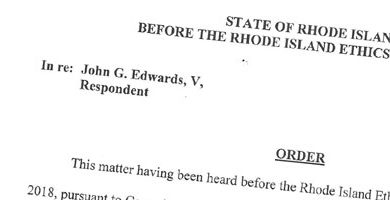