News that Tiverton Schools Superintendent Peter Sanchioni is pressuring taxpayers for a massive 7% increase in his operating budget next year raises many questions that residents and the Budget Committee should pursue.  For one, how did the school department go from having an annual surplus of $1 million every year to an annual deficit of $1 million in just a couple years?

Since his arrival in town, Sancioni has had two wins at the financial town referendum (FTR), in 2018 and 2019. The first successfully moved the schools’ capital expenses onto the town’s budget instead of the schools’, and the second gave him a 5.4% increase.  It may be that he and his political backers are feeling invincible.

But back to the questions taxpayers should be asking, the biggest of which is this:  Where is all the money going?  One hears around town that the school buildings are nearing capacity, and the school administration is predicting nearly a 9% increase in the number of students enrolled in Tiverton next year.  But when it’s pitching its budgets, the school department always claims it’s expecting an increase.  A friend of mine joked that the schools’ enrollment charts look like a person walking on a trampoline: the low-point always follows them.  The numbers are always just about to go up.

Simple fact:  The number of students in Tiverton Schools has been going down for at least 20 years.  See for yourself on the state Department of Education’s enrollment data tool.  The year that Tiverton residents decided to spend $30 million on three new school buildings in 2004, the enrollment that October was 2,177.  This year, it was 1,691.  That’s a 22% drop.  The district has lost one out of every five students it was planning to have when it built new schools.  That drop is almost three full grade levels. 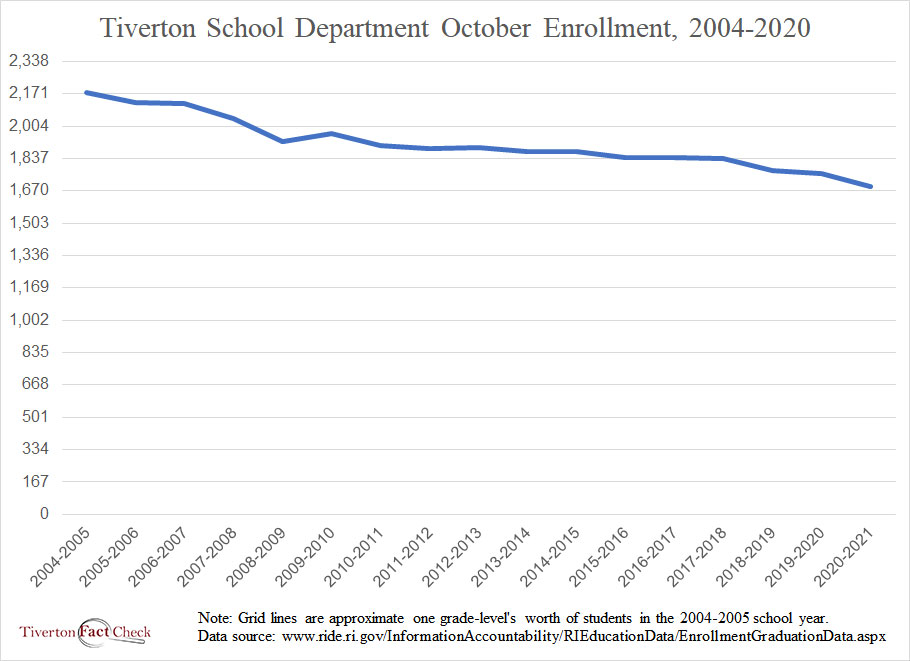 Think about that.  We built schools with enough space for all our children, and now it’s as if all of third grade, all of sixth grade, and all of tenth grade have disappeared.  How can we be running out of space? 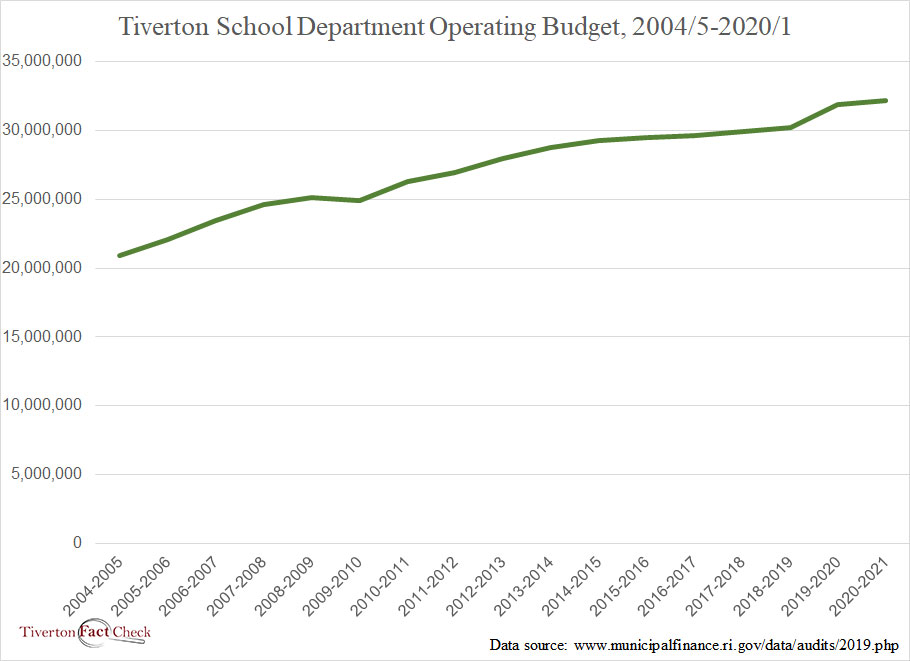 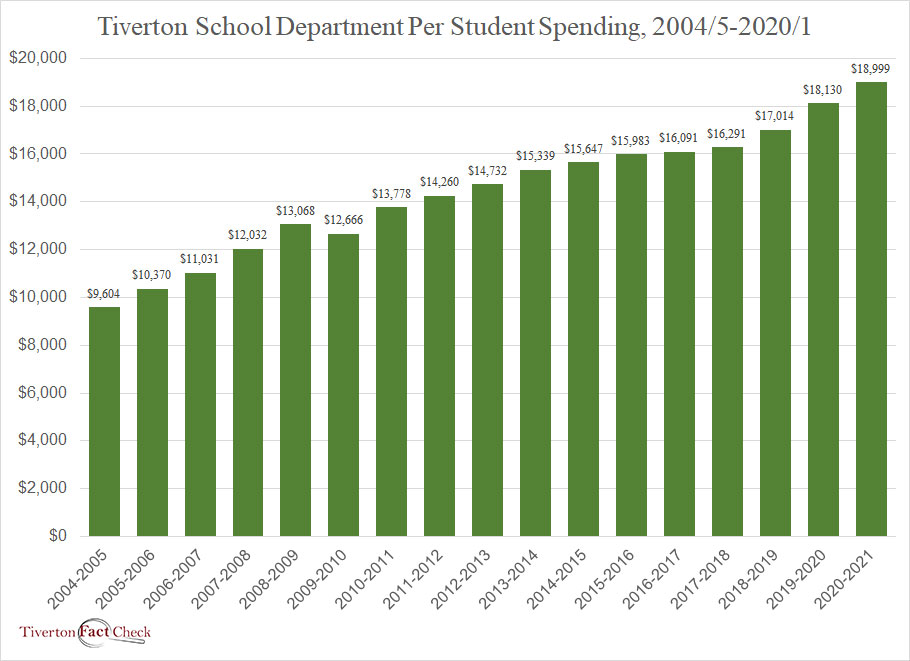 Every resident of a town benefits as its schools improve, but the answer can’t always be more money.  That’s especially true this year.  If all goes well, by the time of the FTR in May, we’ll be emerging from the devastating COVID lockdown.  Emerging from isolation and assessing the economic wreckage is not the time to be committing to a big increase in government spending.  For that matter, the schools can’t reliably predict how many families will shift permanently to private schools or homeschooling or how many have left the town, state, and region for more opportunity elsewhere.  The Rhode Island job market has been gutted during the past year and hasn’t come close to recovering as much as the nation as a whole.

This is not the time for threats and false charts.  The irresponsible Newport Daily News reprinted a presentation slide from the school department showing “residential tax rates” that is flat out wrong. 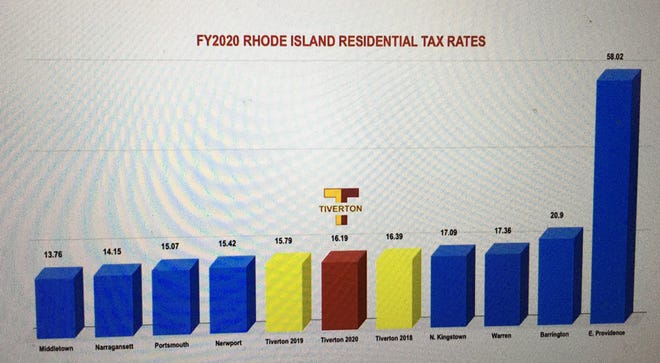 A review of state numbers proves that this chart uses tax rates for “personal property,” which is not real estate, and which towns treat very differently.  This is simple to check, and anybody who deals with local budgets and taxes professionally should look at the number for East Providence and know that something is wrong.  A tax rate of 58.02 would mean that somebody with a $250,000 house is paying $14,505 in taxes every year. A working-class family with that sort of tax bill on a mortgage would be bankrupt the day after they bought the house.

This sort of mistake isn’t just sloppy.  It shows that somebody was looking at the state’s table of tax rates with a plan to show an extreme chart rather than the truth, even though it shouldn’t have passed the smell test.

Not surprisingly, therefore, the schools’ chart also doesn’t take into account the fact that some towns offer homestead exemptions that lower the tax rate for most taxpayers (people paying taxes on their primary residences in the town).  Using the correct tax rates and adjusting for the homestead difference changes the picture for Tiverton to this: 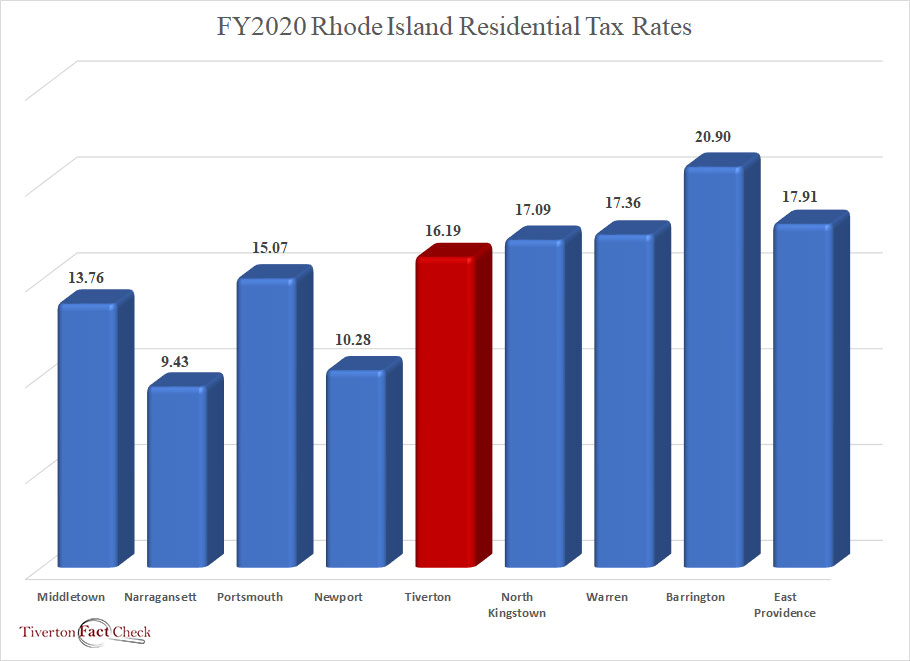 Of course, it’s still possible to make the case that Tiverton’s schools need or deserve more money, but going after (1) a massive tax increase (2) during a pandemic-caused recession after (3) a year with parents carrying much of the burden for education and (4) using false charts gives the impression that the goal isn’t to balance all of the needs and wants of residents, but rather to grab as much money as people can be tricked into voting for.

Again, now is not the time for that sort of attitude, and Tiverton residents should make note of it. 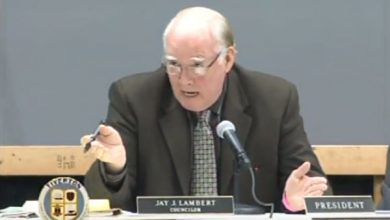 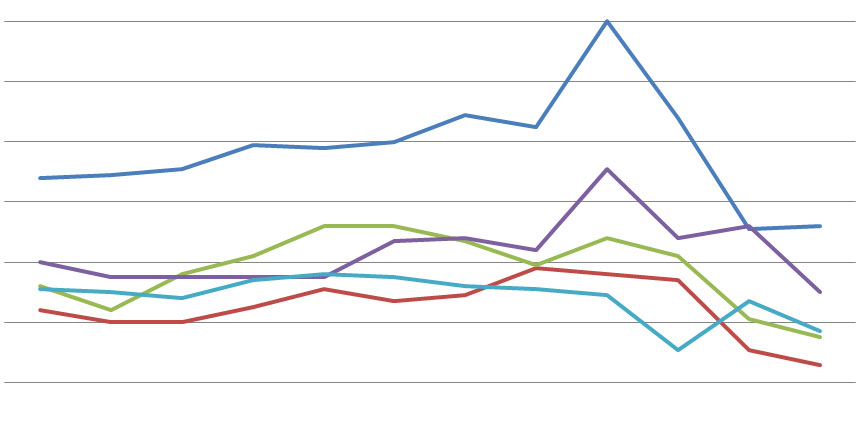 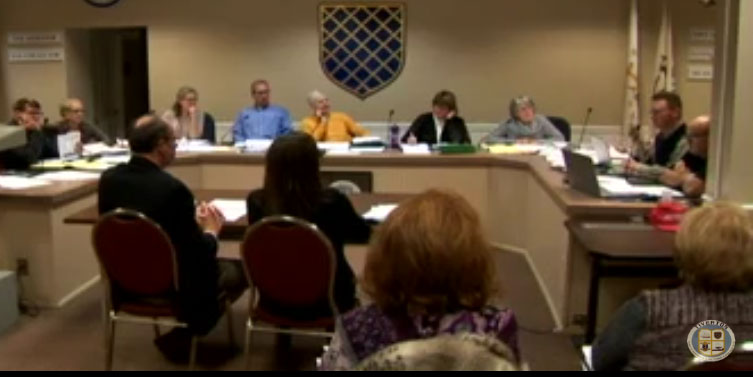 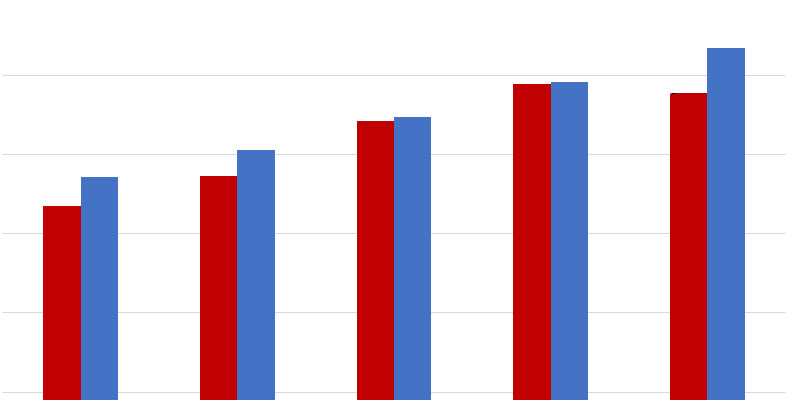